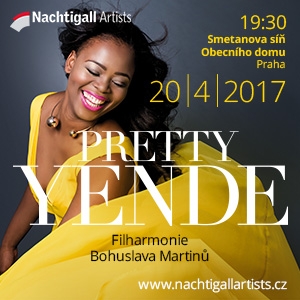 The Bohuslav Martinů Philharmonic Orchestra is to appear in concert with the young and talented soprano Pretty Yende in Prague and Vienna.

The stunning South African made her debut in 2013 at the Metropolitan Opera, when she appeared as understudy alongside Juan Diego Flórez in Rossini's Count Ory, with only a week to master the part. The critics were effusive in their reviews, and one famous opera stage led her to another with appearances in Vienna, Los Angeles, New York, Milan, Paris, Barcelona and Berlín, to name but a few.

The concerts on 20.4.2017 in Prague's Obecní dům and on 23.4.17 in Vienna's Konzerthaus will feature some of the best-loved operatic arias by G. Rossini, V. Bellini, G. Verdi, J. Offenbach and others.

The Bohuslav Martinů Philharmonic will be conducted by the American conductor Christopher Franklin.