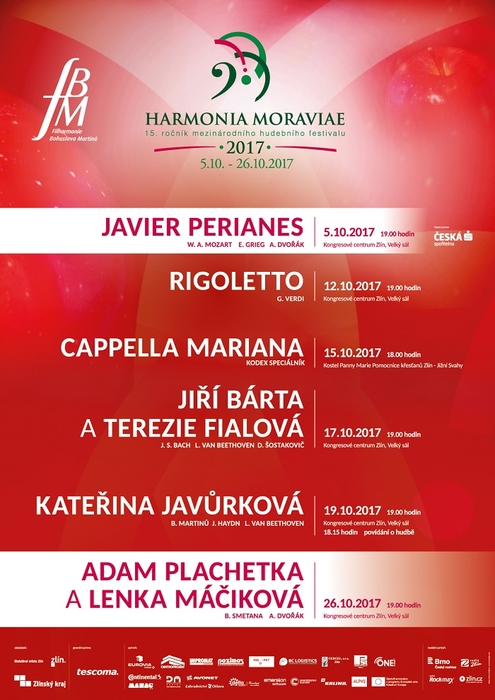 The fifteenth season of the Harmonia Moraviae festival begins this year with its opening concert on 5th October featuring the world-famous Spanish pianist Javier Perianes, who will play Edvard Grieg's piano concerto under the baton of the Bohuslav Martinů Philharmonic Orchestra's chief conductor Vojtěch Spurný.

The next performance is a concert version of Giuseppe Verdi's opera Rigoletto with some of this country's leading opera singers currently engaged at the Prague National Theatre, the Janáček Opera in Brno and the Moravian-Silesian National Theatre in Ostrava. The title role is sung by the outstanding Czech baritone Ivan Kusnjer, supported by Jana Sibera, Michal Lehotský and a­ number of others.

On 15th October the Church of the Virgin Mary (Panna Marie Pomocnice křesťanů) is the setting for the Prague-based Cappella Mariana's period instrument ensemble performing the Kodex Speciálník, a programme of polyphonic works from Prague written around the year 1500.

In the next concert which also features works by Martinů and Beethoven, the horn player Kateřina Javůrková, a recent laureate of the Prague Spring music festival, will perform Joseph Haydn's horn concerto, conducted by  Leoš Svárovský.

The final concert showcases the internationally renowned baritone Adam Plachetka who will be accompanied by the Slovak soprano Lenka Máčiková singing arias from operas by Dvořák, Smetana, Fibich and others.

Tickets on sale at the Bohuslav Martinů Philharmonic’s Box Office at the Zlín Congress Centre and on-line.