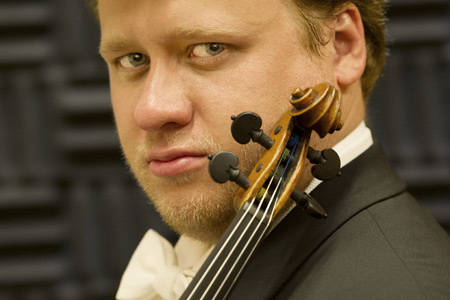 Pyotr Ilyich Tchaikovsky wrotehis Violin Concerto early in 1878 shortly after Eugene Onegin and his Fourth Symphony. The concerto thus came into being at essentially the same time as Brahms's D Major Concerto. But while Brahms wrote what was almost a symphony with obbligato solo violin, Tchaikovsky's composition, by contrast, was a typical Romantic concerto highlighting the solo part against a perfectly instrumentated orchestral accompaniment. The extremely difficult solo violin part conceals within itself a number of technical challenges, but captivates the ear with its melodic beauty and the way it uses the instrument's sparkling brilliance.

In 2012, the Russian violinist Andrey Baranov  won the Queen Elisabeth Competition held every year in Brussels for the best violinists worldwide.

Bohuslav Martinů wrote his Second Symphony, which he himself called a pastoral symphony, during a short time spent by the sea near New York.  The second movement is reminiscent of Moravian folk song and Janáček's style. The symphony was commissioned by the Czechoslovak community in Cleveland.